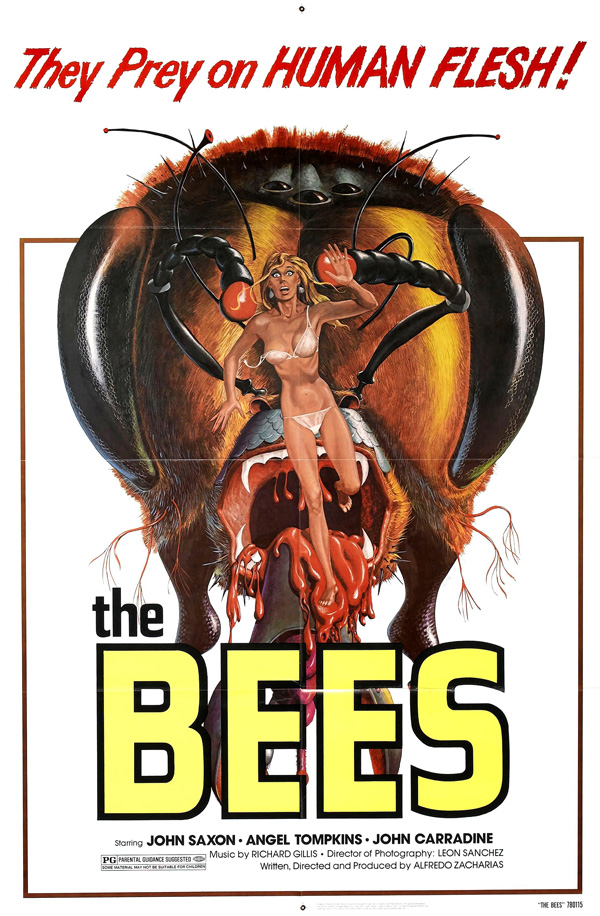 A man and his young son break into the compound of apiologist (bee guy) Dr. Miller to steal the valuable honeycombs.  Ignoring the danger signs, they open a particularly nasty hive of killer bees which overtake them.  The next day, the man returns with some friends and his dead son.  He blames the death of his son on the scientist for bringing things to the area worth stealing.  Despite this flawless logic, Dr. Miller (Claudio Brook) asks the men to leave.  The angry mob refuses and, as angry mobs often do, they wreck the place.  In the riot that follows the villagers release the bees, die violently, and catch fire.  In an effort to retrieve his notes, Dr. Miller dies, but manages to save his wife Sandra (Angel Tompkins) by locking her in a walk-in fridge.
Cut to Sandra in the elevator in John Norman’s (John Saxon) California apartment building.  Two muggers attack Sandra in the elevator and immediately open her cosmetic bag.  Standard behavior so far.  Sandra, a natural beauty has no need for make-up so in her bag she carries bees.  The killer bees run amok and kill the muggers.  Sandra emerges from the elevator unscathed since she coos sweetly and bees like that.  She arrives at John’s apartment with her bag half full of bees and never mentions the mugging or the two dead guys in the hall.  John and Sandra hit it off right away and make plans to go to John’s lab to look at bees and flirt a lot.
Meanwhile, massive clouds of killer bees form all over the country and leave destruction and death in their wakes.  Behind all the mayhem, a large cave of bees hums with activity.  It reminds me of scenes in The Haunting in which Robert Wise shows us an event, then cuts to a shot of Hill House to let you know the house sees all…only with bees.
John, Sandra, and Sandra’s uncle Ziggy (John Carradine with an atrocious accent) start working on methods of taming the bees or preventing them from reproducing.   It helps that Ziggy (the Bee Whisperer) believes bees use a more sophisticated form of communication than most people think.  There’s a cool scene in which Ziggy translates bee dancing.  It may have been a bit more detailed than real, but it was still fun.
Fighting the scientists, “Big Business” wants killer bees to thrive so they can add them to their huge corporate hive.   This would create superbees and a more refined and expensive type of royal jelly.  The corporate baddies want to replace the sugar in most consumer products with honey thus becoming honey sheiks and ruling the world and getting all the hot chicks.  To that end, “Big Business” has a politician in its pocket who helps them with the copious bee legislation which crosses his desk.  At a hearing before several pols, John outlines his plan to treat the killer bees with a pheromone which will make the drones mate with each other rather than the queen which breaks up the panel because they have a mental age of seven.  They crack a lot of bad gay jokes and say things like “adding incest to injury” and make plans to go get popsicles.  While John speaks in Washington, the bad guys send a couple of guys to off Ziggy.  They try to take off, but the bees have other plans and John returns home to a blood bath in the lab.  Worn out from cleaning corpses out of their office, John and Sandra go to bed.  John wakes in the middle of the night and begins to make love to Sandra only to find she and he and their bed covered in bees.  The lovers manage to extricate themselves from the bedroom though because they speak bee.  This was the last straw.  John, determined to inform the world about the plight of the bees and the reach of their power and not deal with bee-us interruptus again, goes back to Washington to testify before Congress.  As he speaks, a cloud of bees enters the room and begins to air their grievances through John.
Alfred Zacharias (The Pearl, Crime of Crimes) wrote and directed The Bees and while it’s not the best B-movie I’ve seen, it is the best bee movie I’ve seen involving John Saxon, hit men, and terrorists wielding jars full of bees.   I enjoyed The Bees and it even won an award.  Dan Genis won the award for Best Special Effects at the Catalonian International Film Festival.  Besides, it was fun.  John Saxon always entertains, John Carradine played a fun, quirky character, and I never knew what would happen next.