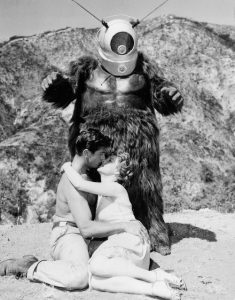 Romance During the Invasion

How can you take an alien monster seriously when he has an Automatic Billion Bubble Machine? How can you not laugh when the monster, Ro-Man, has the body of a gorilla and wears a diving helmet? The answer is, you can’t. It’s so bad that it’s entertaining. It’s “Robot Monster” and it’s accidentally hilarious!

“Robot Monster” has many of the common elements of bad b-movies in the sci-fi genre. Hokey monsters, questionable science, bad acting, annoying kids, a little awkward romance on the side, terrible dialog, cheesy special effects, use of stock footage that really doesn’t fit with the rest of the movie, and Bronson Canyon, a popular place to film low budget flicks.

The plot involves aliens scheming to kill mankind and take over the Earth. Not an incredibly original plot, but at least the use of an automatic bubble machine sets this movie apart. There are a LOT of bubbles. With a budget of $16,000, the movie has fairly decent production values for a b-movie, though the special effects leave a little something to be desired, even for the era.

There are plenty of WTF moments, the most blatant of which comes early on when Johnny falls down at the mouth of the cave, for no apparent reason, and the movie cuts to what appears to be a gila monster and a crocodile with a large fin on its back fighting on a set which is clearly designed to make the animals appear larger than they really are. Cut to half a second of triceratops fighting. Cut back to the two reptiles in a death roll. Cut back to the cave where there’s suddenly a bubble machine! BUBBLES! Oh, and Johnny apparently changed his outfit while he was blacked out, since he’s now wearing shorts instead of pants. You got the significance of all of that? Yeah, me neither.

Just because the humans are being chased down and hunted by the Ro-Man doesn’t mean they can’t take time for a little romance, right? While it’s believable that the characters Roy and Alice could eventually fall for each other, it happens laughably fast and their decision to take a honeymoon while the Earth is being invaded is even more laughable. You just know they’re going to run into the Ro-Man, and no surprise, they do.

The dialog is ridiculous, the most quotable being Johnny’s pronouncement “You look like a pooped out pinwheel.” Another gem is when Roy declared to Alice, “I’m bossy? You’re so bossy you ought to be milked before you come home at night.” Oh yes, those two will make a great, enduring couple. 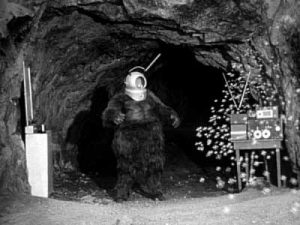 Probably the best part of the movie is the music, composed by Elmer Bernstein, the award winning composer of such scores as Thoroughly Modern Millie, The Magnificent Seven, The Great Escape, and Ghost Busters. While the score is great, it isn’t always used appropriately, with upbeat, energetic tracks used where there’s not a whole lot of action.  Honestly, there isn’t a whole lot of action, unless you count trudging around Bronson Canyon aimlessly as “action”.

Accidentally Hilarious - Flag on the Moon : A Look at Coleman Francis