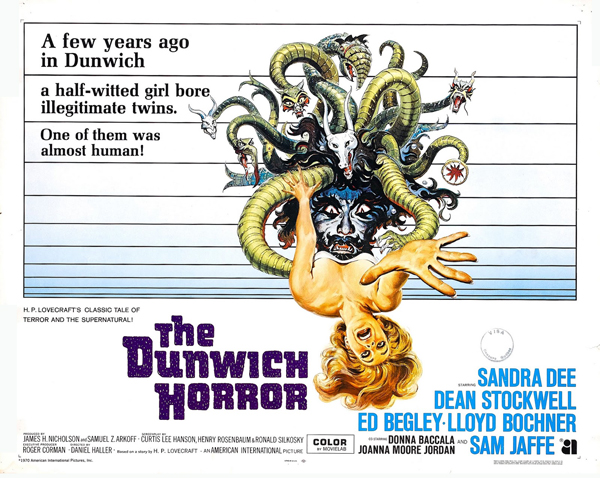 Set in the mythical Miskatonic Valley like many of H.P. Lovecraft’s tales, The Dunwich Horror revolves around Dean Stockwell in a role even creepier than the one he plays in Blue Velvet. Stockwell’s Wilbur Whately lives in Dunwich, Massachusetts with his raving grandfather Sam Jaffe, and where the natives, who often speak with southern accents, avoid them.   Anyway, Wilbur Whately wants Ed Begley’s Necronomicon so he can summon some of his buddies from a parallel universe to come and play with him and Sandra Dee. Sandra digs hanging with Wilbur because he adds copious amounts of hallucinogens to her tea which make her woozy and dream she’s watching a revival of Hair.   I won’t spoil it for you but the trippy lighting and creature effects and projections onto canvas gave the film a distinctive look and the breathy heartbeat sounds added to the spookiness factor.   Along with the cast I’ve mentioned, Lloyd Bochner, 70’s staple, and Talia (billed as Coppola) Shire also appear in small character roles.   I haven’t read the original Lovecraft story but I know many of them take place in a fictionalized version of Wilbraham, Massachusetts (the real home of Friendly Ice Cream) which sits about 160 miles inland so the ocean puzzled me a bit but no matter.   It was a fun 60s, 70s, witch hunt, hippie, parallel universe, Satanic ritual, acid flick. Yog-Sothoth!