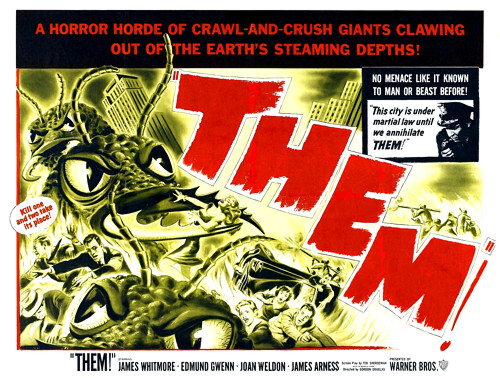 A series of bizarre deaths and some odd footprints baffle New Mexico policeman James Whitmore.  His superiors send the prints to Washington. FBI agent James Arness and father/daughter entymologists Edmund Gwenn and Joan Weldon arrive to investigate and soon they’re battling huge mutant ants in the desert.  Sounds cool, doesn’t it?  It is. An engaging story, solid performances, and convincing large insects make Them! the best of the mutant bug movies of the 1950s.  In fact, Them! serves as a template for many of the alien invasion/giant insect films to follow.  It’s even scary.  Scenes in which the team goes underground to explore the ants’ lair have you on the edge of your seat and the sudden blast of ant sound effects (made by the grey treefrog) was startling.  Veteran director Gordon Douglas (In Like Flint, The Detective) keeps the pace brisk and the story compelling.  We learn enough about these characters to like them and the cast, made up of A and B+ level actors push this film way above many in the genre.  Warner Brothers made the film and used many of its up and coming actors in cameos. Leonard Nimoy, Fess Parker, Richard Deacon, William Schallert, and Dub Taylor show up in small roles and help give the film some of its polish.  They also had a A-list crew with Bronislau Kaper’s  original score and Gordon Bau’s make-up.  Them! was even nominated for Best Effects/Best Special Effects at the 1955 Oscars and was the highest grossing film Warner Brothers made in 1954.  So next time someone tells you mutant bug films don’t cut it in the quality department, tell them about Them!. I mean, any film that has the Wilhelm Scream, moulage, and Santa battling oversized killer ants must be a winner.