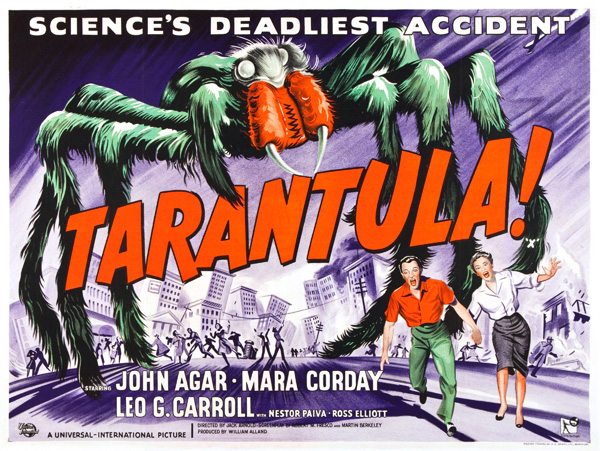 A horribly disfigured man in pajamas stumbles through the desert, collapses, and dies.  When local doctor (John Agar) sees the body, he doubts Professor Deemer’s (Leo G. Carroll) diagnosis of acromegaly (gigantism) and suspects  the professor might be complicit in his colleague’s death.  While he ponders this, Steve (Mara Corday) arrives in town in a stunning white travel ensemble to work in the lab for the pajama-clad dead guy.  Since he’s not hiring

, Steve begins working for Deemer instead, but not before igniting a little romantic fire under John Agar.  Agar has little time to plan his love life though because something attacks the livestock in their sleepy little community and leaves nothing but bones and a big puddle of white liquid.  Testing proves the white stuff comes from a tarantula so we’re treated to a filmstrip on them right out of the substitute teacher collection. Soon Dr. Hero Guy discovers Professor Deemer in an advanced state of acromegaly and the truth comes out.   Deemer, fresh from his work on the Manhattan Project opened his lab in the desert to work on a nutritional supplement designed to rid the world of hunger.  His experiments on rabbits and guinea pigs showed great promise and Deemer fed the animals the formula exclusively.  They matured at an advanced rate and grew much larger than their usual size.  A couple of his colleagues figured if the serum made a guinea pig grow to the size of a police dog it must be great for humans, so they injected each other with the stuff.   Oddly enough, the two men suffered tremendously when the radioactive isotopes clashed with their body chemistry.  One wandered into the desert in his pjs and the other, miffed about his impending demise, wrecked the lab and shot the professor up with the serum.  The lab animals either died in the ensuing blaze or scurried off to roam the countryside.  Since this film is titled Tarantula and not Guinea Pig, I’m sure you can figure out who made it out alive.  As to why they used tarantulas in lab tests I’ll never know.  I guess the profs just liked having them around.  Since they have a humongous radioactive spider snacking on the locals the sheriff (Nestor Paiva) calls the state police, who in turn alert the air force.  Napalm encrusted hijinks ensue and we see the requisite fighter squadron stock footage which, in this case, blends skillfully with the rest of the film. Director Jack Arnold (Creature from the Black Lagoon, The Incredible Shrinking Man) does an admirable job

and uses decent effects and music by Herman Stein to create suspense.  A few of the scenes made me jump.  The cast of B/A- actors deliver solid performances and the natural dialogue moves along nicely.  There’s some real chemistry between Corday and Agar and we care what happens to these characters.  I love big bug movies and Tarantula is a fun one.  Look for Clint Eastwood in one of his first movie roles.  Hmm…I wonder if anyone has made a giant guinea pig film.