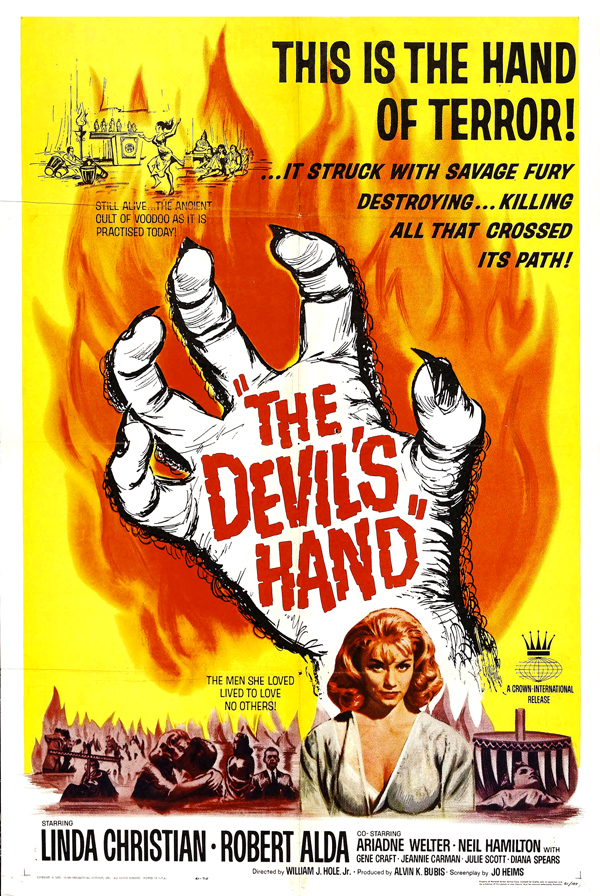 Rick Turner (Robert Alda) has a problem. Despite being engaged to the sweet and lovely Donna Trent (Ariadna Welter), working a job with a future, and wearing a series of hideous sweaters, he has disturbing dreams about a beautiful woman which keep him up every night.  During one of his insomnia induced walks through the city, he comes upon a doll shop and spies a doll which reminds him of his dream woman.

The next day, Rick and Donna visit the shop and meet the proprietor, creepy to the extreme Francis Lamont (Neil Hamilton-Yes! Commissioner Gordon!) who tells Rick he ordered the dream woman doll and must bring it to Bianca Milan (Linda Christian).  Rick has no memory of this but brings the doll to Bianca anyway.  He falls in lust at first sight and blows Donna off completely.  If that weren’t bad enough, poor Donna suffers in a hospital bed with a sudden heart ailment brought on by Francis’ sticking a pin in a doll with her likeness. Moments after they meet, Bianca tells Rick he must renounce all goodness and virtue and join her cult which worships Gamba, the devil god of evil.  Since he has nothing else planned, he agrees and goes with Bianca to a meeting of the cult in the back of the doll shop. I have to say that an evil cult meeting in the back of a doll shop does not surprise me.  The Kerry Scale of Creepy rates clowns as the most creepy.  After clowns come dolls that look like you, regular dolls, and ventriloquist dummies. 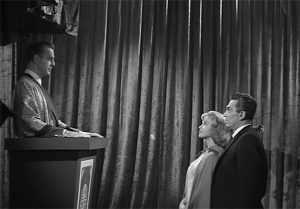 Rick flourishes using Gamba’s evil and soon he has money, a cool car, and a far more fashionable wardrobe.  Donna’s still in the hospital with a pin in her doll’s chest.  Rick lusts after Bianca and they share a few sexy kisses.  The movie hints at sex, but Rick still goes home and sleeps in his little twin bed.  Anyway, we get to see a few Gamba Book Club cult meetings where people dance to bongo music and cult members sit on pillows and watch each other tested for loyalty under a knife-filled light fixture.  Commissioner Gordon officiates over these meetings speaking with the same voice you use when you’re a kid having a fake séance and wears a natty smoking jacket/bathrobe over his shirt and tie.  It’s a lot of fun really.

Obviously the halcyon days of Gamba can’t last forever and since this stuff happens in a movie, it all has to come to a conclusion they’ll love in Peoria.