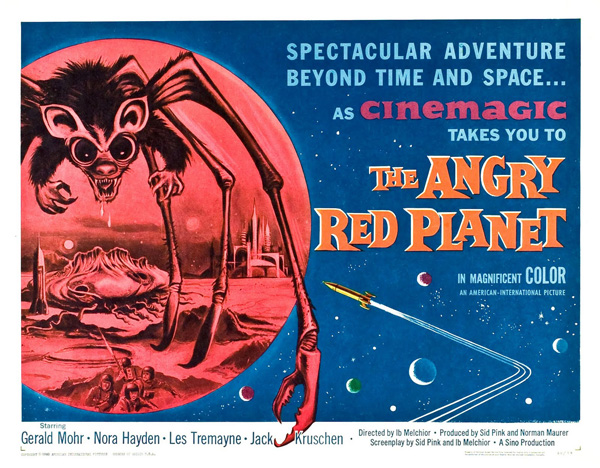 The film begins at mission control where the brass has just gotten around to retrieving the long missing MR-1 rocket.  They last heard from the ship and its crew of four as it orbited Mars.  Ground control decide they want the rocket back because it’s full of data.  They assume the crew died ages ago so they bring the rocket back expecting an ugly surprise when they open her doors.  Apparently it’s a snap to bring a rocket back from a Mars orbit because they throw out some sort of grappling hook and tow her home.  Of course there are survivors and as they recuperate in the hospital, they tell their tale.
We meet the crew via flashback in their living room sized control center.  They lounge sans breathing apparatus, make hokey remarks, and pose for the camera while eating canned goods.  Les Tremayne as Professor Gettel, sports a pointy devil beard and buttons his top button so he’s the smart one.  Colonel O’Bannion (Gerard Mohr) wears his jumpsuit unbuttoned to his waist and leers at Dr. Iris Ryan (Nora Hayden) a lot so he’s the hunky one.   Sam (Jack Kruschen) has a beer belly and no title so he acts as comic relief.  The ship lands on Mars and, wearing their protective cotton/poly jumpsuits, the foursome go out to meet the neighbors.  Dr. Ryan’s botanist/zoologist attempts to classify the various flora as they traipse through the Mars jungle.  The flora don’t take kindly to classification though and that’s when the fun begins.  I should also note that the Mars scenes were filmed using Woody Allen’s red light bulb from Annie Hall and have an unexposed negative quality to them.  It made the planet’s surface look eerie and other-worldly.  After a run-in with some large vegetables, the gang head back to the ship where they talk a bit and we see an exciting montage of people cleaning things and putting them in drawers.  Since they met with plant-based rebellion the last time, the travelers leave the ship for the second time with all the trepidation and preparedness of an expedition to the largest ball of twine.  At least they bring machetes and a boat.  Yup.  They row across a vast Martian lake after testing the water, of course.  The professor checks it for radiation and Iris swishes her hands in it so we know it’s safe.  On the lake, they run into more Martian hostiles and a genuinely weird creature that makes this all worthwhile.
Despite tons of inaccuracies and dialogue like, “The hell with radiation!  Let’s go!”  The Angry Red Planet entertained me.  I loved the idea that a space agency chose a female botanist for a landmark flight and she got attacked by a plant.  I also loved that they brought a boat.  This film had odd and original effects, a cool monster, and fun mint jelly-based injuries.  It was worth watching if only to see another example of what filmmakers thought space travel would become.