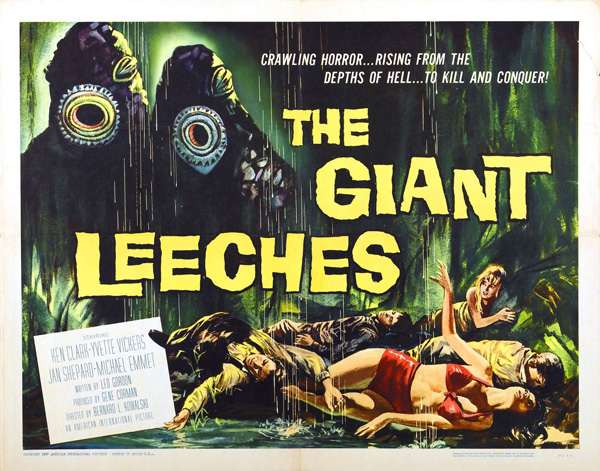 Lem, a moonshiner famous for telling tall tales claims he saw a giant ‘octypus’ while poaching deer near the swamp.  When he goes missing, Game Warden Steve (Ken Clark) and a handful of men search for him.  They find him dead and drained of all his blood.  Still no one in the Florida country town believes Lem’s stories except Steve, his girlfriend Nan (Jan Shepard), and her father, Doc Greyson (Tyler McVey).  Steve and Nan take a boat out on the swamp to search for anything out of the ordinary, but come up empty.  Meanwhile back at the general store, slatternly Liz Walker (Yvette Vickers) teases and belittles her wimpy husband Dave (Bruno VeSota) and takes off to be sleazy elsewhere.  After a bunch of conversation that goes nowhere we find that Doc Greyson wants to dynamite part of the swamp to flush out whatever killed Lem but Steve will not allow it.  Here’s where this film differs from most mutant creature films.  Steve, the game warden takes his job

seriously and wants to protect the animals in his jurisdiction.  He won’t allow Doc to dynamite the swamp or do anything else that might harm wildlife in the area.  Compare this to Creature From the Black Lagoon (1954) in which the ‘scientists’ throw chemicals, poison, bombs, and everything but the kitchen sink into poor Gilly’s lagoon in the name of science.  I digress.  Back at the general store, Liz puts on her favorite low-cut frock and heads out to the swamp for her date with local creep, Cal.  Liz’s husband, Dave, wielding a shotgun, surprises the couple mid embrace which ruins the mood completely.  He then chases them through the swamp at gunpoint and forces them into the water.  He just wants to scare them though and as they attempt to crawl out of the swamp a couple of slimy, suction cup covered creatures grab the lovers and pull them down into the swamp.  Dave, shocked, tells the police, but oddly, they don’t believe his tentacled fish-man story and toss him in the brig.  The sheriff offers a reward to whoever finds the bodies and two more locals disappear.  Doc Greyson introduces a theory that nearby Cape Canaveral’s radiation may have caused the leeches’ mutation and brings up dynamite again but Steve vetoes his suggestion.  As soon as Steve leaves, the doctor and Nan place charges in the swamp anyway and up come the bodies of three of the four missing locals.  Since Liz hasn’t turned up yet, Steve and a former Navy buddy strap on air tanks and go swamp diving.  An underwater battle between Steve and a giant leech guy leaves the leech wounded and Steve convinced that maybe blowing up the swamp isn’t such a bad idea after all.  A huge blast brings the dead leech and Liz to the surface.  Everyone sighs with relief because the nightmare is over…or is it?
I liked aspects of Attack of the Giant Leeches, but on the whole it left me cold.  The story, written by Leo Gordon (The Terror, Tobruk) held my interest, but the acting was pretty poor and that dragged it down a peg.  The eerie music fit and helped set the stage for bloodsucking fun.  Bernard L. Kowalski (Night of the Blood Beast, Rawhide TV series) uses a fairly straight forward approach to directing.  There’s nothing arty here, but no matter.  A few scenes really stand out.  The scenes in the leeches’ underground lair are pretty creepy.  Watching mutant leeches suck the blood out of their captives and leave their hickey-covered bodies in a crumpled heap made the film worth watching.  All in all Attack of the Giant Leeches is worth a watch and at sixty-two minutes, the leech-filled time flies by.