Marie Osmond and Doug Henning buy a pet shop only to find that the turtles are possessed and are convincing the kittens and goldfish to mutiny. Can Marie and Doug outfox the turtles? And what of the hamsters? Will they revolt or join Marie and Doug? Music by Liberace and Iron Maiden and cinematography by Ray Charles make this worth a watch.

I just wanted to see if you were paying attention. 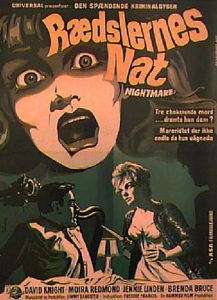 Janet, a teenager away at boarding school, has horrific nightmares involving her mother and stabbing and death and junk. She keeps waking up in the middle of the night, screaming, so they send her home so everyone can get a decent night’s sleep. She keeps having bad dreams, but why? Are they really dreams? And what does Janet’s mom-who’s-in-a-mental-institution have to do with all of this?

Freddie Francis, who also directed The Skull and The Deadly Bees, and did the cinematography for The Elephant Man, is good at setting scary scenes and getting to the point. He directed a number of other Hammer and Amicus features and was director of photography on a few Powell/Pressburger films too. Writer, Jimmy Sangster wrote a metric shit ton of films for Hammer, including Scream of Fear and The Snorkel, which rule. 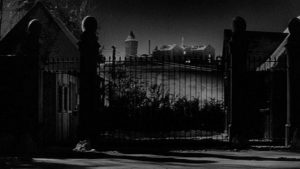 Please join us on Twitter at 11pm edt on Friday, July 14, 2017 and use the hashtag #BMovieManiacs to tweet along. Here’s the link to the film. Nightmare  Just press play at 11 on the dot and watch with our gang. We’re not like the others.

That’s how you know.