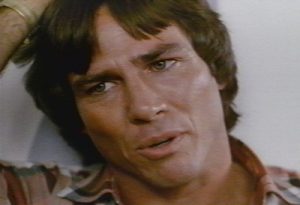 Richard Hatch passed away this week. We at #BMovieManiacs like to pay our respects to filmmakers who enrich our lives by making wonderful, terrible, and surprisingly entertaining films. Hatch was most famous for his role as the hero, Captain Apollo in the Battlestar Galactica television series. He also acted, directed, produced, and wrote a number of other TV series from the 1970s to 2017. We’ll miss seeing his handsome face in front of the camera. 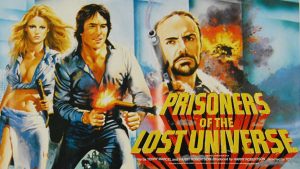 Dan Roebuck (Richard Hatch) is a handsome plumber with a rad pick-up truck. He meets Carrie Madison (Kay Lenz) and they begin fighting immediately. Carrie and an earthquake wreck Dan’s truck. Dan is annoyed. Carrie leaves him on the side of the road to visit a scientist ’cause that’s what you do. After wacky Dr. Hartmann (Kenneth Hendel), walks into a time machine and disappears, Dan and Carrie follow him back in time. Obviously, there are cavemen and a green guy and John Saxon as Kleel, a major baddie with a crush on Carrie. Can they escape? Will they fall madly in love? Does Dan have full coverage on his pick-up truck? 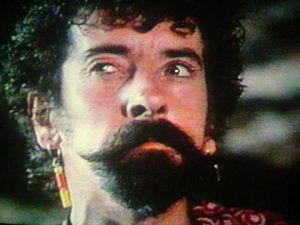 “You say this is a no-fault state?”

We’ll answer these and many other questions on Friday, February 10 at 11pm eastern when we live-tweet Prisoners of the Lost Universe. Join us on Twitter using the hashtag #BMovieManiacs. 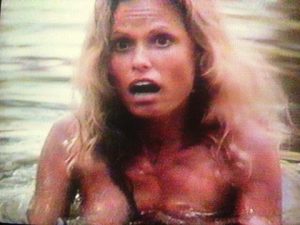 Beignets and Bees on the Bayou: The Savage Bees (1976)