I love B-Movies. Given that I’m writing a couple of articles for a B-Movie blogathon, that can hardly be surprising. In my decades of watching them, I’ve always been more attracted to the crime genre than to those of the fantasy and sci-fi genres. Perhaps it’s due to the crime dramas being set in the real world (or a world more real than can be found in those other genres.) My attitudes toward Ed Wood’s work runs in the same way. He’s mostly remembered for his majestically bad sci-fi movies (Plan 9 From Outer Space, Bride of the Monster), but for me, it’s his crime dramas which I remember him for. Making a sci-fi movie look low-budget is relatively easy; it takes a special kind of talent to make a movie set in the modern world look absolutely unreal in every way. Ed Wood had that talent, and he used it to great effect in films like Glen or Glenda (1953) and The Violent Years (1954). For me, though, the absolute best (and by best I mean worst) film Ed Wood ever did was The Sinister Urge (1960).

The Sinister Urge is the story of the effect of pornography on society as a whole. At least, that appears to have been Ed Wood’s goal with the film. In the film, the police are seeking a sex crazed maniac who is killing women in the smut racket. The killer, Dirk Williams, works for the woman who runs the smut ring, Gloria Henderson, and her smut director boyfriend, Johnny Ryde. Dirk likes smut. A lot. When he isn’t out seeking more smut to look at, he’s killing another woman. The police, despite an advanced knowledge of the inner workings of Gloria’s setup, are completely unable to either break up the ring or catch the killer. Eventually Dirk, Johnny and Gloria get their comeuppance, and the city is free from smut.

Ed Wood’s vision of pornography (aka smut) is that everyone in town appears to be either a producer, or a consumer, of it (except the cops, of course.) Moreover, the teenagers in town seem inexplicably linked to it. According to Ed Wood’s vision, high schools and ice cream parlours are hotbeds of vice. Which, let’s face it, is pretty much the same argument in most other teenage films of the period. Further, Gloria’s crew seems to be composed entirely of teenagers, mostly girls who distribute the smut and, when needed, break a few legs to get payment. Gloria seems to depend on them a lot, which makes it all the more stranger when she says that she doesn’t like it when the girls know too much about the setup. There doesn’t seem to be much for them to discover, but if they do, she has Dirk shut them up permanently.

Dirk’s motivation as a killer in Sinister Urge seems to depend entirely on what part of the script they’re reading from. Early on, Gloria admits to Johnny that she’s used Dirk to shut up potential blackmailers. Johnny expresses his concern about it, reminding her that smut does strange things to Dirk, and bad things happen. Gloria says she can handle him. By the second half of the film, their roles are reversed. Johnny uses Dirk in some of his pictures. Gloria echoes Johnny’s earlier feelings, but Johnny says he can handle Dirk. Of course, both use the caveat that they can control Dirk “when they can find him.” As you can no doubt guess, Dirk spends the vast majority of the film looking after himself, causing trouble and seeking smut. 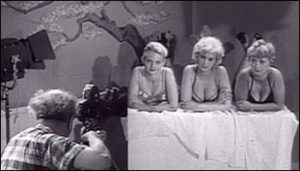 And speaking of smut, the movie is downright laughable when it comes to the depiction of said smut. This gigantic operation that Gloria runs seems to consist entirely of Johnny and an odd elderly man who lapses into a Germanic accent whenever he’s “directing.” What we see him “directing” consists entirely of middle aged women wearing bikinis and, occasionally, even more clothes. In the real world, such pictures can indeed be made sexy; in Ed Wood’s world, they’re not. It’s pure Ed Wood fantasy. And just to add to that fantasy, when Ed shows us Johnny’s office, it’s clearly not meant to be real. How do we know this? The walls are all decorated with posters from Ed’s own films. And yet, it’s obviously not Ed’s own office, but a set. Why would he build a set when he could have saved even more money by using his office? Because the office would look real, and the movie was about fantasy and the mind. 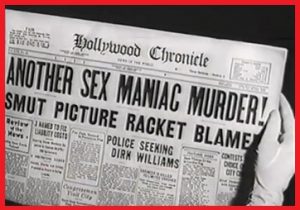 Ed’s examination of the effects of smut uses the police investigation as a sounding board for dialogue that’s meant to sound deep and significant. What it does instead is show the police as ridiculously inept. They appear to know all about Gloria and her operations, yet all that information does them no good at all. Do they know who makes the stuff? Yep. Do they know where they make and sell the stuff? Yep. Does all this information help? Nope. Instead, they come up with half-assed plans to maybe come up with the goods, to no avail. When they finally discover Dirk is the killer (thanks to Dirk conveniently leaving his fingerprints on some smut at a crime scene) they come up with the idea of having a male cop dressing up as a woman as a decoy. This plan fizzles out, and it’s only because Gloria herself goofs (in a wonderfully inept final scene) that they’re finally able to close the case. Incompetence rules the day, which sounds like something that might be said about Ed Wood’s films as a whole.

To be honest, I don’t know much about Ed Wood, or the thought processes he had when he made his films. What I do know though is that, whether intentional or not, the amateurishness of his films makes them clearly fantasy. You can’t watch an Ed Wood film and misinterpret it as reality. The acting, the dialogue, the fakeness of the sets all make it clear that this is all fake. It can be hard to reconcile a movie about women being murdered with being fun, but The Sinister Urge makes it impossible to take anything in it seriously. And therein lies the fun. 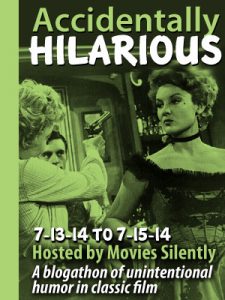